As we leave the grim history of Estonia behind us, we travel to more festive surroundings: Paris, France.

Patti gets much of the inspiration for her story Devotion while staying here. This city is so large, colorful, and historic that it would impossible to do a single tidbit on it. Instead, we will break it up into manageable bites that Patti consumes as she

her next short story.

I'll begin with a brief overview of the Latin Quarter that serves as her hub of operations. In future tidbits, I'll delve deeper into Patti's particular muses: Gallimard Publishing House and Simone Weil. In other tidbits, you will dine

with Fireflydances at Café de Flore and savor the genius of Patrick Modiano and Albert Camus.

Sit back, have a glass of wine

and enjoy as we spend the next two weeks in Paris! 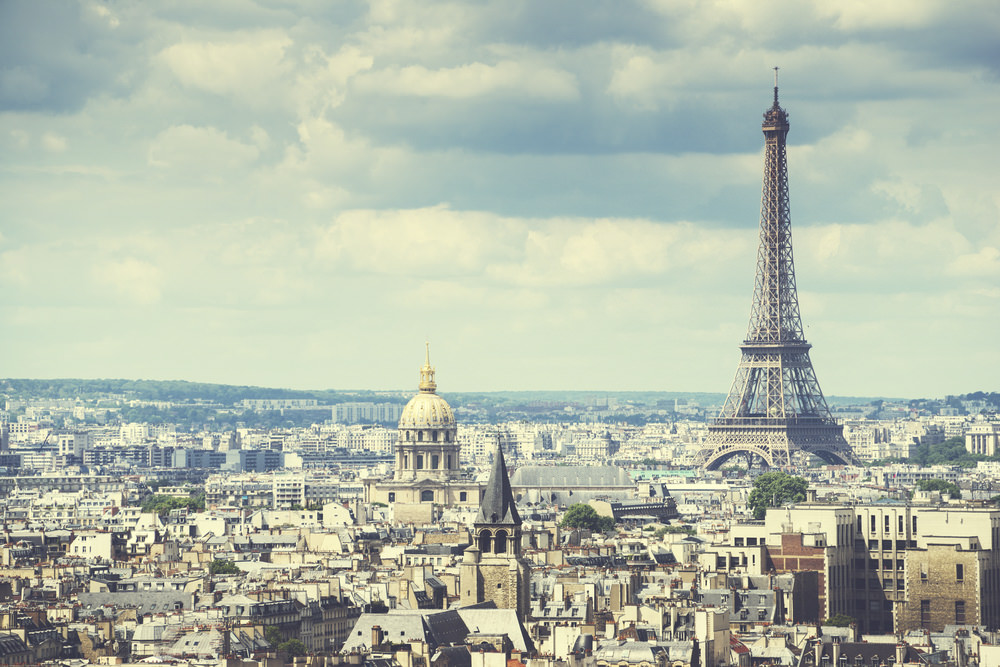 No doubt about it, Paris is HUGE! And beautiful. And full of tourists!
Having traveled to Paris often, Patti is no longer a tourist, so we will skip the obvious scenery. 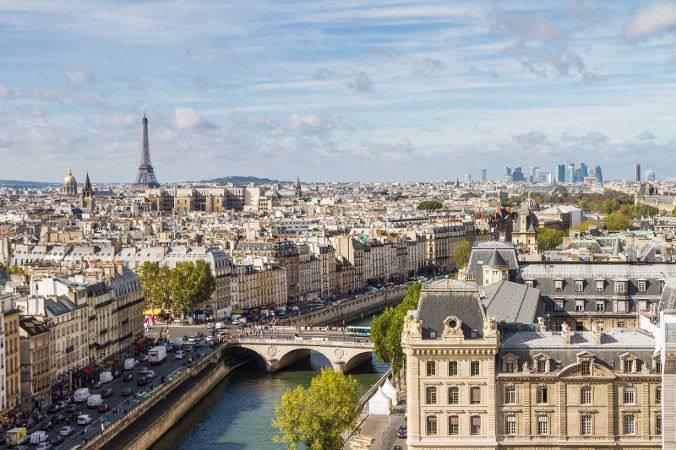 When you break the city into neighborhoods, it becomes a very friendly and intimate place. Patti's kind of place: full of joie de vivre and culture. She chooses to stay in the Left Bank. 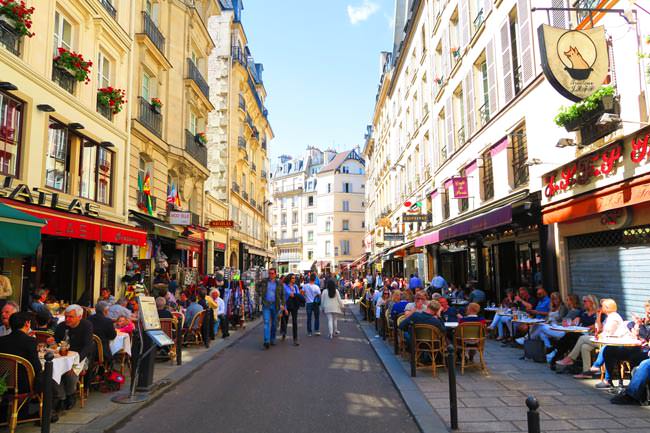 I've made a map of Patti's neighborhood so you can follow along. The link is an interactive version that will take you throughout Paris. 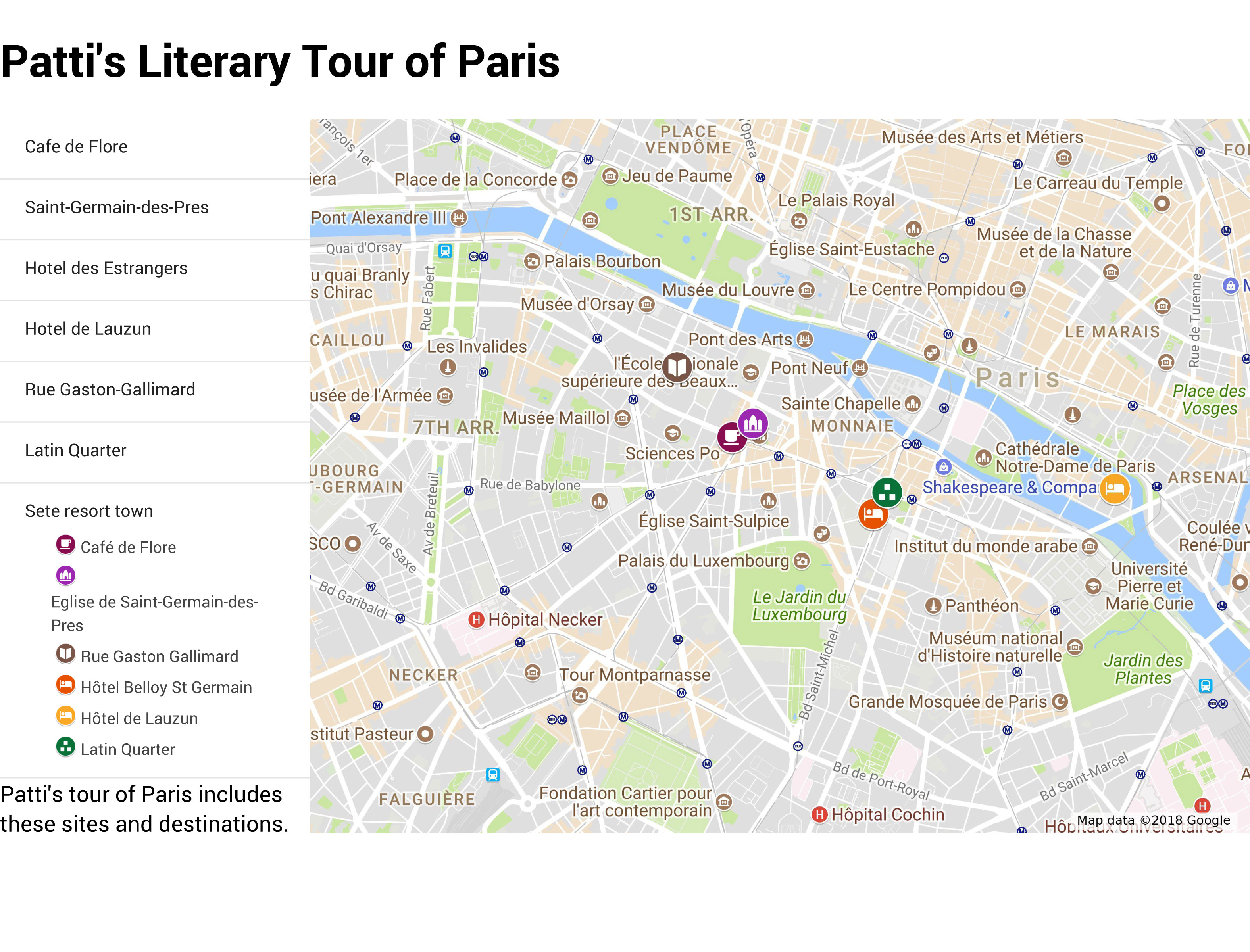 The Left Bank area is located on the left bank of the River Seine (opposite Notre-Dame Cathedral) and is considered the traditional neighborhood for intellectual,

Famous sites in this area include the Luxembourg Garden, the Latin Quarter, the Cluny Museum, St. Germain-des-Prés and St. Sulpice churches, Panthéon, Montparnasse Tower, Catacombs, Delacroix Museum, and the Jardin des Plantes Park. I recommend watching the two videos at the end to get a better appreciation of this area and these attractions.

There is also an abundance of cafes, shops, and hotels. The streets are narrow, untouched from the days of the French Revolution. This makes walking a very casual and intimate experience while giving one time to enjoy the surroundings.

The Latin Quarter has been the hub of Roman Paris and the center of education (University of Paris, Sorbonne, etc.) since the Middle Ages. People came from all over Europe to study here and Latin was the thread that connected everyone.

Fast-forward to the 21st Century and it is now known more for its bohemian characters, street artists, relaxing cafes (haunts of past poets), and exhausted tourists.

This area is home to many historic, yet functional structures, including a medieval sewer system where the street slopes into a central brick channel. Before indoor plumbing, maids would empty the "convenience" buckets from the windows

and into the street channels. Eventually, the waste would wash into the Seine.

After checking into her hotel, Patti heads to Café de Flore to sip some coffee

(Patti is always sipping a cup of coffee!). Fireflydances will tell you more about this gem in the next tidbit. 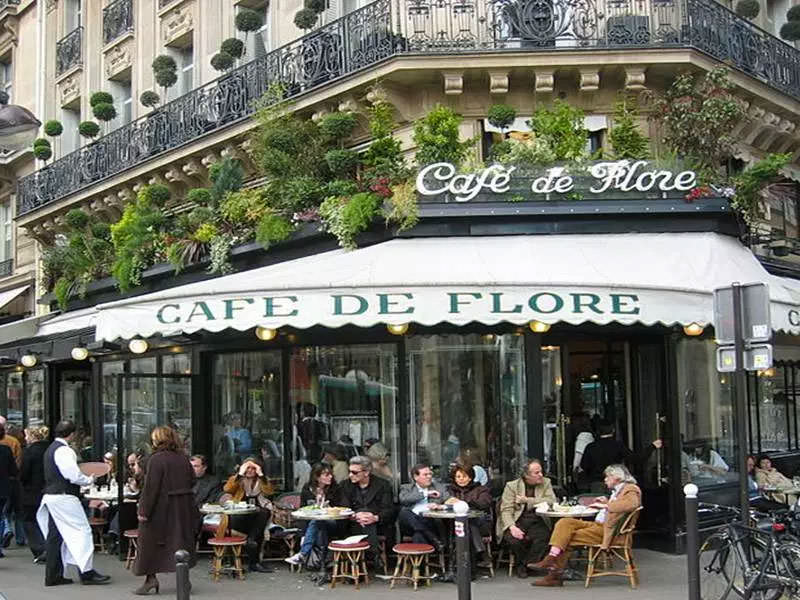 The café is part of the Elise St. Germain-des-Prés Church district.

The St. Germain-des-Prés Church and Abbey were first built in 558 AD on the ruins of a Roman temple. Parts of it have been destroyed and rebuilt throughout history, making it the oldest church in Paris and a medieval marvel. 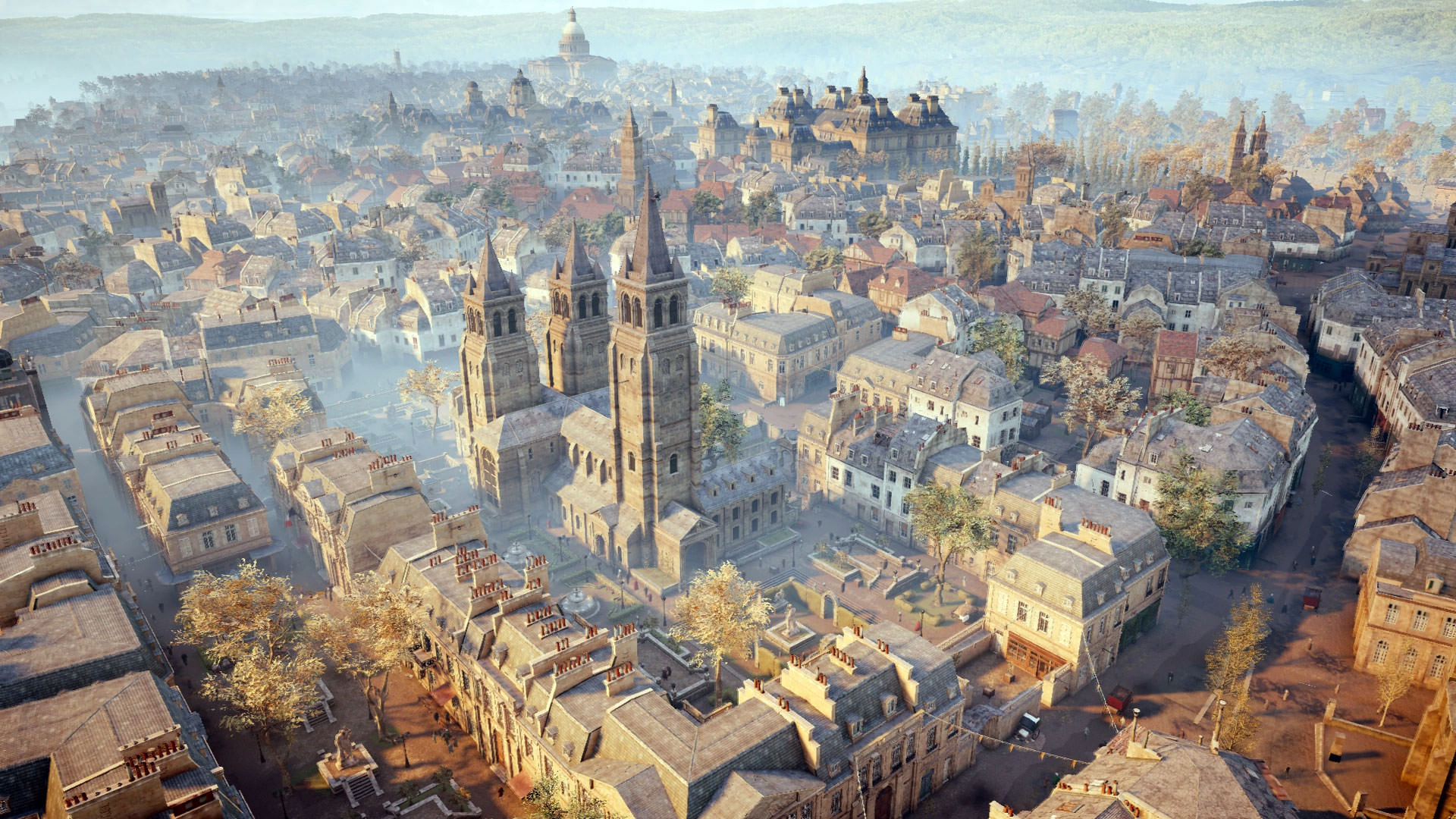 It was the center of affluent and Catholic Paris until most of it was destroyed in the French Revolution, leaving only the main church. The street that bears its name and district surrounding the church continues to thrive today. 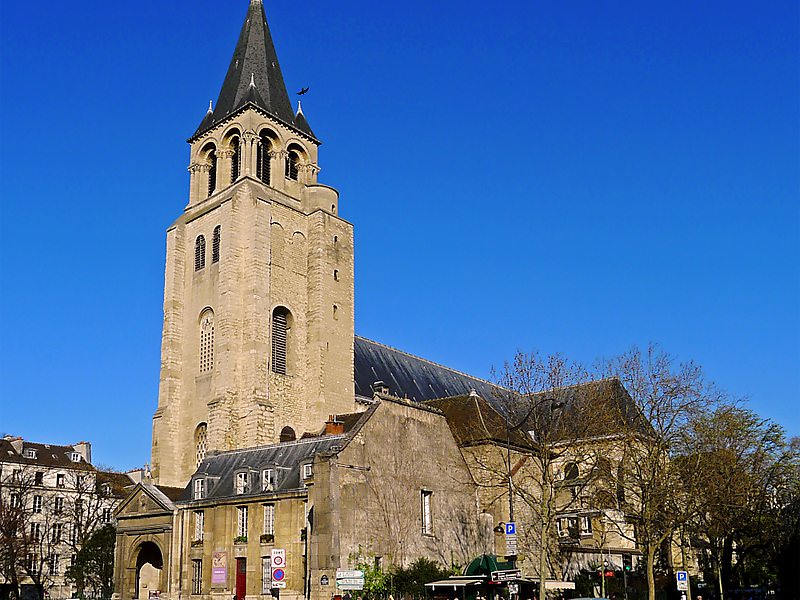 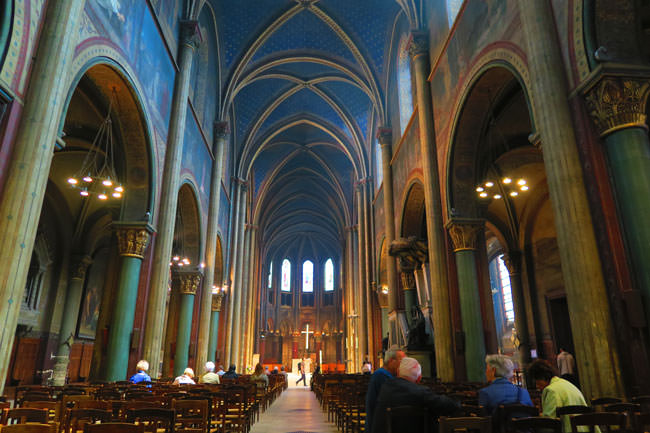 As Patti wanders through the streets, she reminisces about previous visits and the many literary greats that also found inspiration in this neighborhood.

She strolls past the bust of Apollinaire by Picasso in the churchyard, recollecting a trip with her sister in 1969. 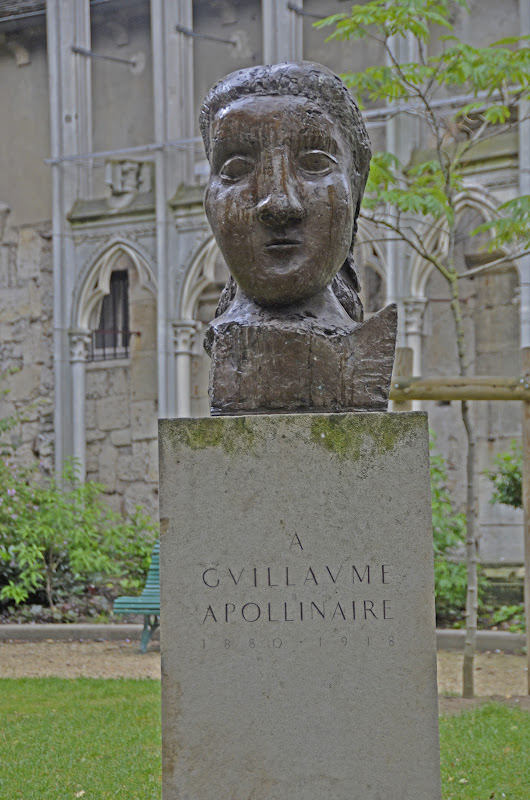 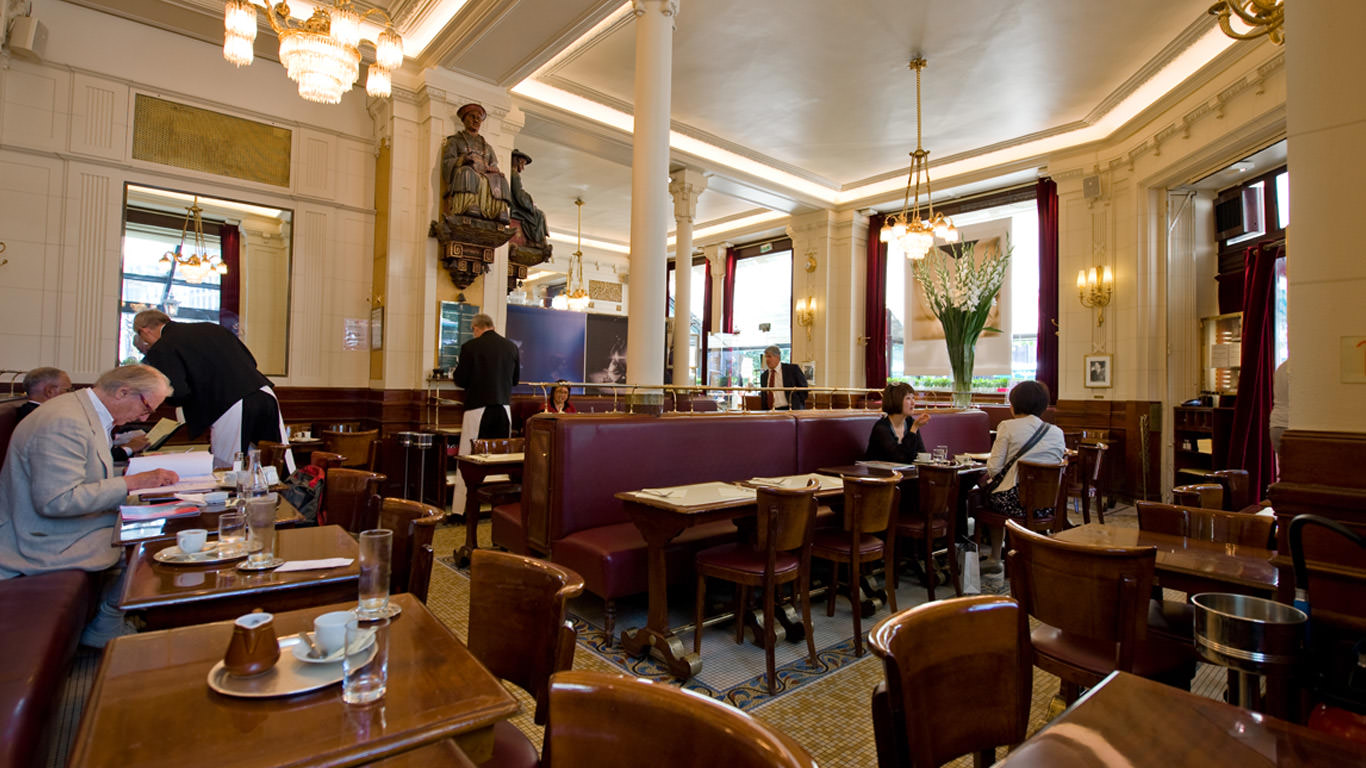 Patti recollects her previous visits to the Hôtel des Estrangers and the Hôtel de Lauzun. 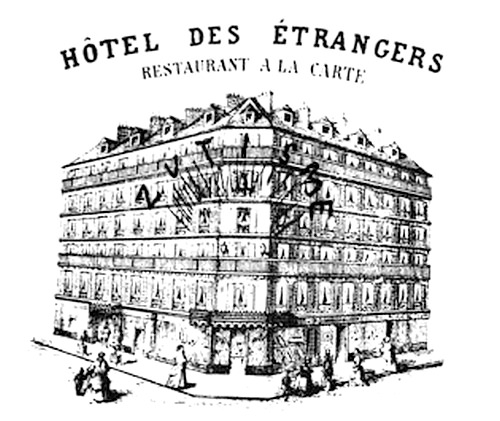 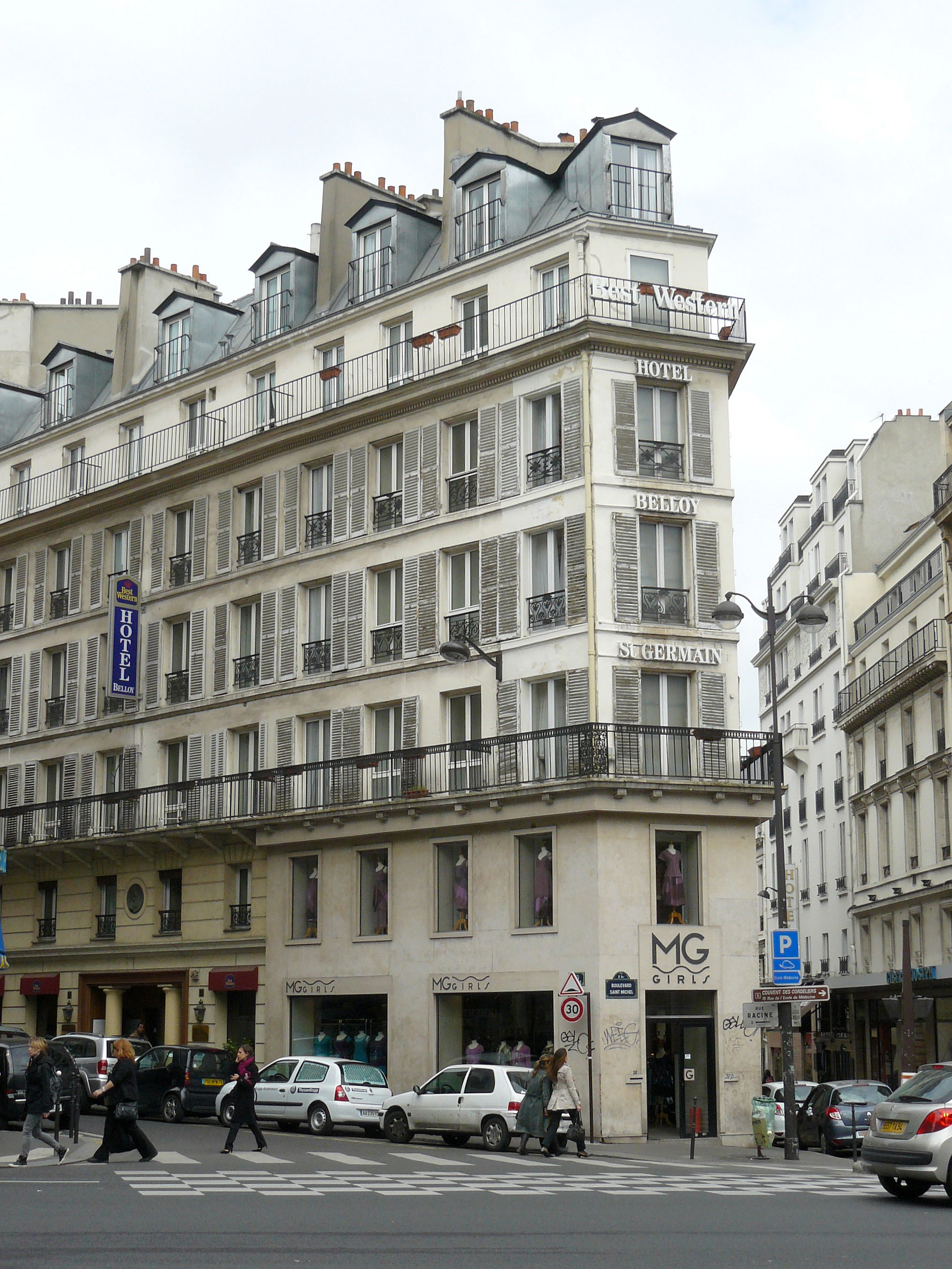 Radical luminaries such as Charles Cros, Arthur Rimbaud, Paul Verlaine, André Gill, Ernest Cabaner and Leon Valade formed the Circle Zutique and wrote poetry that parodied and ridiculed the Paris of the 1860s.

A collected work, Album Zutique, was discovered in the 1930s that revealed the black humor, caricature, and controversial thoughts of the group.

Between December 1870 and February 1871, Arthur Rimbaud lived on the mezzanine floor at the Hotel Belloy Saint-Germain Paris. 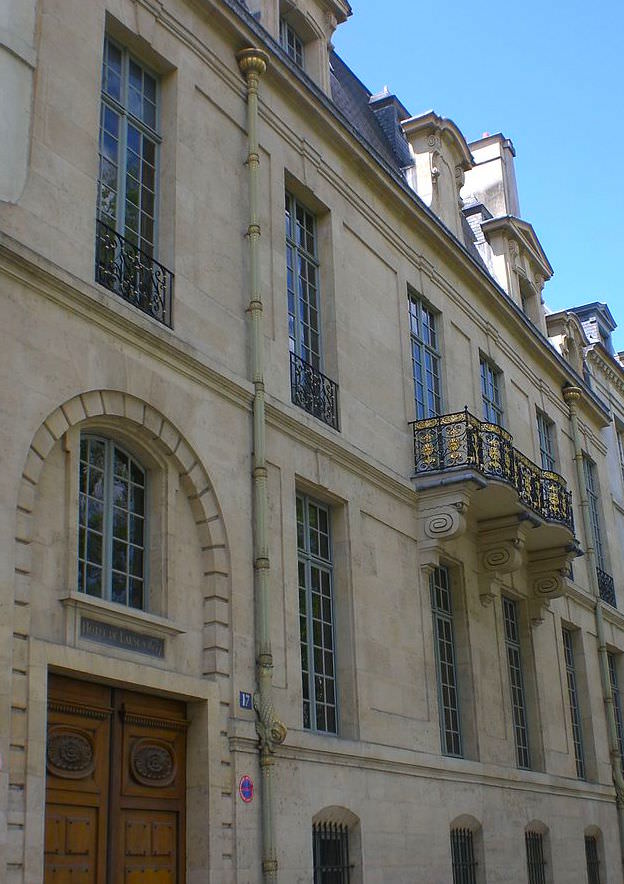 In the 1840s, this group experimented with various drugs, detailing their effects and observations in many of their literary works.

Meetings were described by Théophile Gautier as a "loneliness oasis in the middle of Paris, surrounding by the arms of the river, protecting us against the encroachments of civilization…"La Revue des Deux Mondes, 1846

You can learn more about this group from The Hashishin Club by Théophile Gautier.

The hotel was built in 1657 for Charles Gruyn who made his money selling hay to armies for their horses, however, it bears the name of its next owner, Antoine Nompar de Caumont, Duke of Lauzun. The Marquis de Richelieu and the Marquis Pimodan also called it home until the French Revolution. Baron Pichon acquired the hotel in 1842 when the Hashishin Club was formed. In 1928, the city acquired the hotel and it now houses the Institute of Advanced Studies, devoted to scientific research. 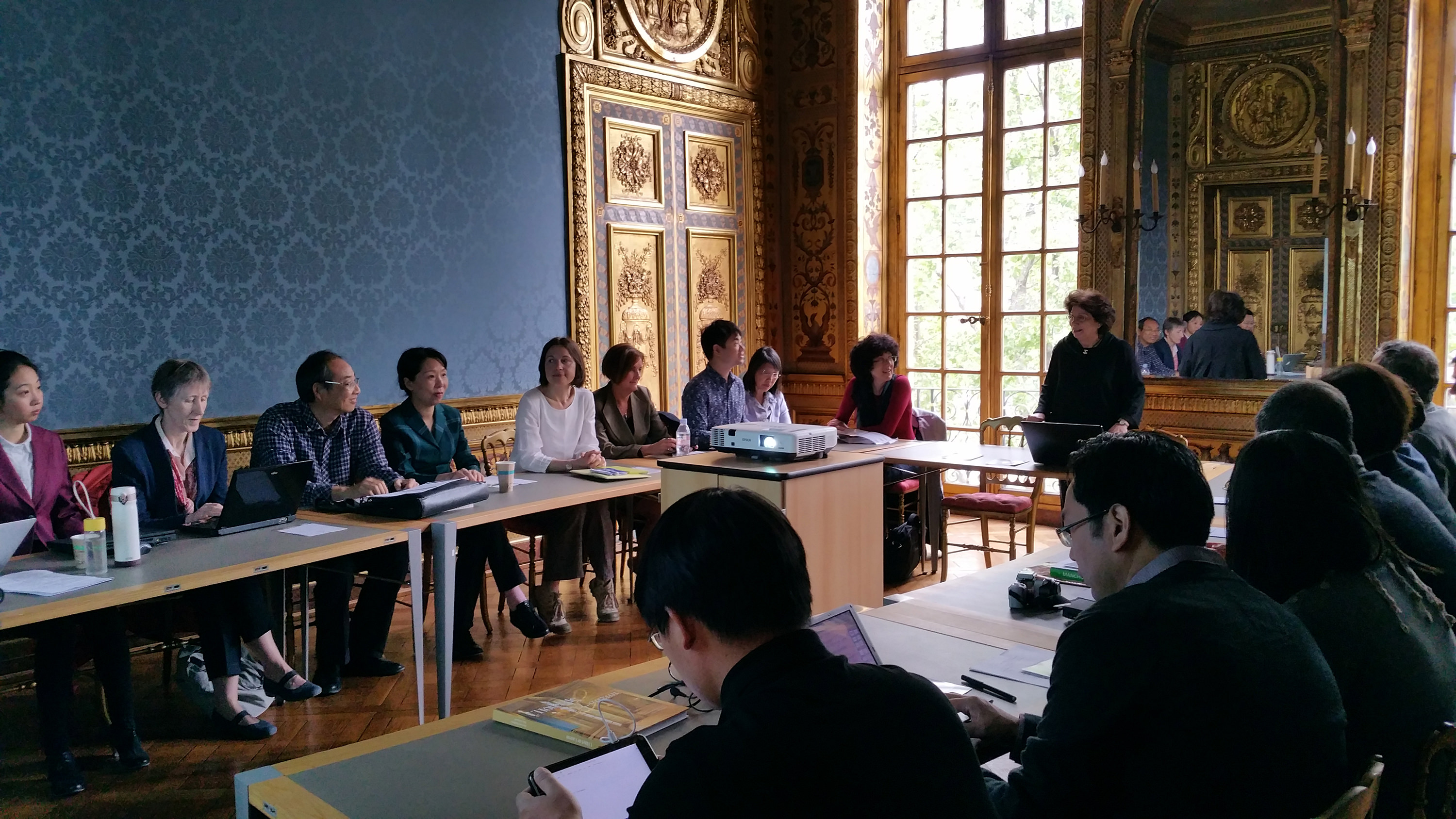 Oh dear, it's getting late

here in Paris. We've talked and walked a long time. Patti draws on these visualizations that not only inspire her but also relies on them in her writings.

I'll leave you for now with these words from Patti.

"I feel a wave of nostalgia induced by the perfect present. It begins to drizzle. Grainy bis of film swirl. The Paris of Jean Seberg in a striped boatneck shirt hawking the Herald Tribune. The Paris of Eric Rohmer, standing in the rain in the Rue de la Huchette." 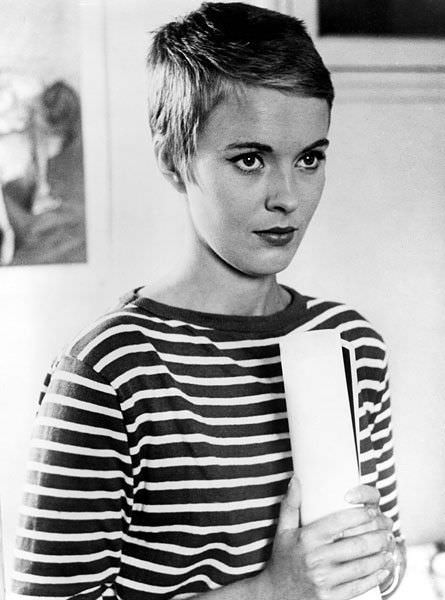 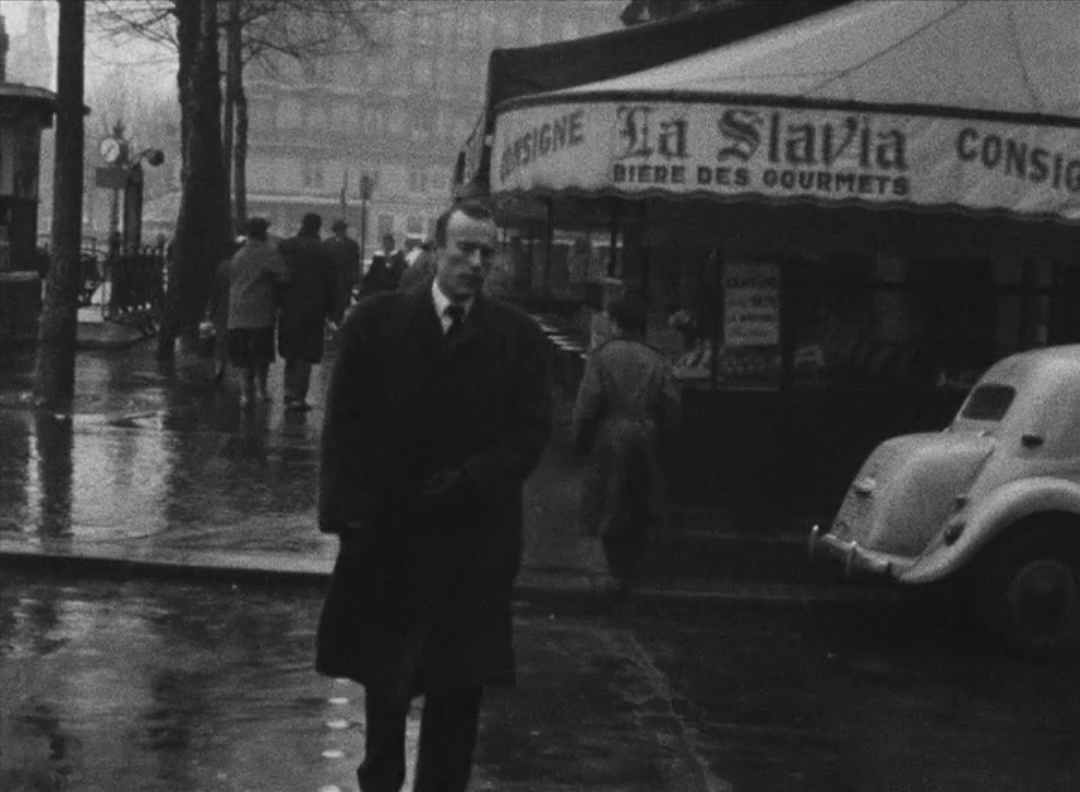 Videos:
There are dozens of videos on Paris showcasing the usual tourist spots, however, these reminded me more of Patti's Paris: neighborhoods full of life, color, symbolism, and inspiration.


The Circle of Poets Zutiques

Snoopydances, what I find amazing is how intertwined our thinking and writing on this book is!! Apollinaire and Jean Seberg -- incredible! And thank you for a wonderful introduction, a setting of the scene, for my piece on Cafe de Flore.
"Some books are to be tasted, others to be swallowed and some few to be chewed and digested." Sir Francis Bacon, Of Studies
Top

Interesting travel videos! The architecture, both old and new, is amazing. My friend who creates stained glass works would be in heaven to see those massive windows. And oh! that magnificent cemetery! I could spend days exploring a place like that.

fireflydances wrote:Snoopydances, what I find amazing is how intertwined our thinking and writing on this book is!! Apollinaire and Jean Seberg -- incredible! And thank you for a wonderful introduction, a setting of the scene, for my piece on Cafe de Flore.

nebraska wrote:Interesting travel videos! The architecture, both old and new, is amazing. My friend who creates stained glass works would be in heaven to see those massive windows. And oh! that magnificent cemetery! I could spend days exploring a place like that.

I've watched many a travel program from the comfort of my living room, but none compare with Rick Steve's. He always humanizes his locales and reminds me that these exotic locations are just home to normal folks. He also focuses on the off-beat and more intimate areas while adding just enough of the main tourist draws to remind you where he is.

I loved the stained glass, too. And that cemetery is a favorite of Patti's...and everyone else it would seem. So much history in cemeteries. I love to explore them, too.

I never think of the tall skyscrapers and concrete/glass buildings in Paris. Same with London. I always think of the old historic districts and not the modern districts. It's a nice contrast.
Top
5 posts • Page 1 of 1