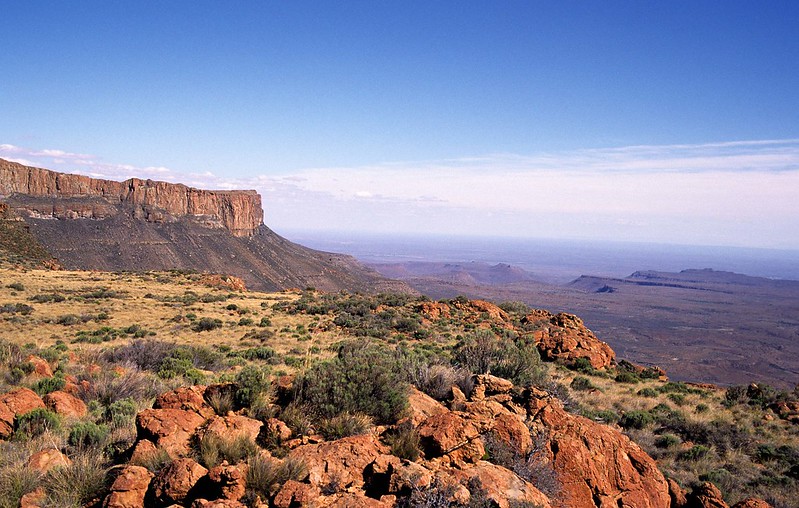 
There is something about a barren landscape, one that stretches out over long distances, that draws me. I live in a region where plants define the horizon. Although I love my trees in all their moods -- lean winter grace, spring showiness, summer lushness and the fall explosions of color -- the open range with its expansive spread that proceeds as far as the eye can follow is something I return to over and over again. There is beauty in a tree but power in a mountain.

So it was a given that I would fall for the Karoo and the thirstland that extends beyond it. I ran across this semi-desert place while reading about Coetzee and discovering his grandfather’s farm Voelfontein. I started looking at pictures online and became mesmerized, and very interested in the geology of the Karoo and the region just north of the Karoo where the landscape becomes even more lean and bony.

We begin with some geography.

Lying at the southern tip of Africa, South Africa runs 900 miles west to east, and 600 miles north to south. There is a tight little coastline like a fringe and then a large plateau whose areas cover two-thirds of the country. In front of this plateau, a steeply climbing mountain ridge called the Great Escarpment runs across the length of the continent, rising at points to elevations of 6000 feet. And in front of the escarpment? Crumpled mountains, squished mountains -- they call them the Cape Fold Mountains. 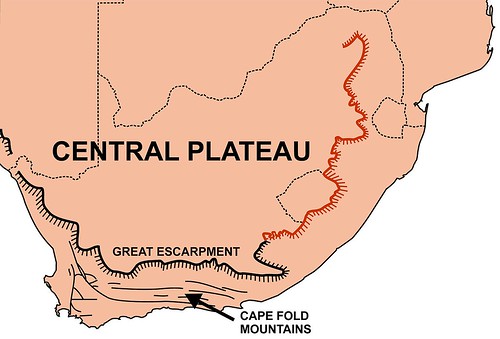 The Cape Fold Mountains were formed when two tectonic plates moved towards each other. The plates’ movement is similar what happens when you push a tablecloth across a surface and the cloth ends up with puffy folds in the middle. They call this a ‘fold and thrust belt.’ Fold mountains are actually rather common and include the Himalayas, Rockies, Alps and the Andes. They tend to occur at the edge of a continental crust, a place of greater weakness, and are composed of two different types of rocks: sedimentary and metamorphic.

The sedimentary rock that is found in the Cape Fold mountains was laid down in a rift valley that occurred in southern Gondwana. I hear some readers sifting through their mental files for the names of continents. We have gone back in time to a period between 510 - 330 million years ago when there was only one super continent and its name was Gondwana. In any case, at the southern edge of this massive continent a rift developed, the southernmost edge stepping a bit away from the rest of the continent. And in this valley a five mile layer of sediment accumulated. That’s basically five miles down of nothing but mud! This resulted in a subduction zone, basically one tectonic plate slipping down and under the other plate. This deposit is called the Cape Supergroup.

About 330 million years ago the valley closed. Both tectonic plates moved towards each other, rucking all that sediment into a series of folds, and simultaneously creating a mountain range of immense proportions. Think of the descriptions of land masses on other planets and you get a sense of what this range was like. On the north side of this towering mass, all those folds of sediments create the Cape Fold Mountains. Here is a quick and dandy graphic that illustrates exactly what happened: 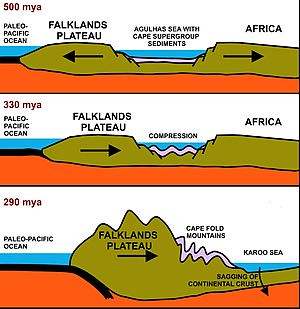 Yes ma’am, that is the Falklands. Things moved around some back in the day. So now more information to ponder. The Cape Fold Mountains shown above were, at that time, contiguous with: the Ventana Mountains of Argentina, the Pensacola Mountains of East Antarctica, the Ellsworth Mountains of West Antarctica and the Hunter - Bowen Orogeny of eastern Australia. Show of hands as to who knows why. Yup, Gondwana had all those continental puzzle pieces mashed together. And we worry about erosion.

Note please the little blue area labeled Karoo Sea. Yup, the Karoo yet to be.

So where is that mammoth mountain range with peaks of colossal proportions? According to my notes, ‘it eroded to relative insignificance during the Mid-Jurassic period, and drifted to the south.’ My guess, it’s now the Falklands, that archipelago of islands off the coast of Argentina. But folks, I have not tested this last assumption, there is only so much research this fool is willing to do!

Now the Cape Fold Mountains have stood their ground for millions of years. By rights they should have eroded away, but they are made of tough stuff -- quarzitic and sandstone. But first, do you remember the first photo in the tidbit about John Michael Coetzee? Mountains covered with snow? Part of the Cape Fold mountain range. 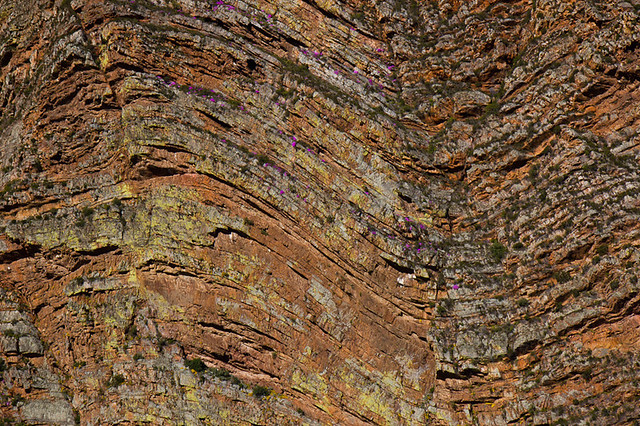 The Karoo Supergroup is an extensive and geologically young sequence of sedimentary and igneous rocks north of the Cape Fold Mountains that formed in a vast inland basin in the interior of South Africa. Today, it occupies two-thirds of the country and occasionally extends underground for distances of almost five miles.

It is indeed a complicated process. But trust me on this, the best way to understand what’s going on is through steps. Each step is a combination of time, events, and a new layer with a new name. The process began roughly 320 million years ago.

1. Dwyka: That blue sea in our graphic got mighty cold while South Africa as Gondwana sat over the Arctic Circle, with enormous icebergs winging off of glaciers and into the sea. Over time, lots of mud, a little more than half a miles’ worth sediment lines the bottom.
2. Ecca: The basin has become a sea with swampy deltas. Lots of peat which makes, yes -- coal. This layer is roughly 1.8 miles deep. The coal is mined in the KwaZula - Natal province.
3. Beaufort: The sea has become a plain filled with massive rivers -- sort of like the Mississippi-- and dealing with an equally massive flow of mud coming down from the eroding mountain range to the south. I am assuming they mean the formerly towering mountain range. How much mud? Around 3.25 miles. And, because this period is also a time of ancient reptiles and amphibians, that mud is filled with what will become one of the richest troves of fossils in the world.
4. Stormberg: The basin has become an arid sand desert with what the article I read called ‘ephemeral rivers and pans’. Basically this means rivers and lakes that come and go with the rains. Not at all uncommon in desert regions.
5. Basaltic: We are 180 million years ago and there is volcanic activity at a ‘titanic scale’ occurring in the basin. (these adjectives are just too good to leave laying in an article) Massive flows of lava pouring out onto the basin covering the region with about a mile’s worth of lava.

One final topic -- the Great Escarpment. The escarpment lies between the Cape Fold Mountains and the vast basin that is the interior plain. An escarpment is a region where the elevation suddenly and dramatically changes. There are several escarpments in the US, the Niagara Escarpment which ripples back and forth along the Canadian - American border is one example. The Great Escarpment forms a steep rise, like an enormous stair or a lift from the coast to the interior plain. How was it formed? Volcanic pressure, that we now know occurred during that 30 million year Brobdingnagian storm of volcanic activity. They call it a mantle plume, ‘an upwelling of abnormally hot rocks.’ A dramatic bulge, if you well. It is amazing to look at. And it is eroding, retreating into the interior and away from the coast.

One of the first shots captures the Great Escarpment-- like a massive ripple on the side of a mountain. Other high points: flat-topped mountains whose sandstone interior prevents further erosion, and later on, weird columns of dolomite who endure because of the hardness of their volcanic material.

The second video takes viewers on a train ride across Karoo with close-ups of farms and towns. The last film is all about the sky, time lapse photography of the changeable daytime sky and the incredible nighttime stars. The Karoo is one of the best places in the world to go for stargazing. The white architecture we see from time to time is classic 19th century Karoo.

Note also the comment about game reserves. Not shooting animals, these are incredibly luxurious retreats to observe and be filled by the beauty of the Karoo. I have a link at the bottom at the photo above if you want to see what I am talking about. I think this particular reserve is running $200 a night but that could be very off. I didn’t want to call and ask -- I figured the answer would make me cry. Their goal is to help return the Karoo to the time before the trekkers arrived by introducing animals that used to range across the land.

The Karoo of South Africa

A Train Ride Across the Great Karoo


One last perfect picture. A salt pan ahead of the trail near Mier in the North Cape which is directly north of Karoo, which has its own salt pans but not so stunning as this picture. The website was about motorcycling through the North Cape. Some pans are used for extremely fast race cars, like what we do in the US at the Bonneville Flats in Utah. 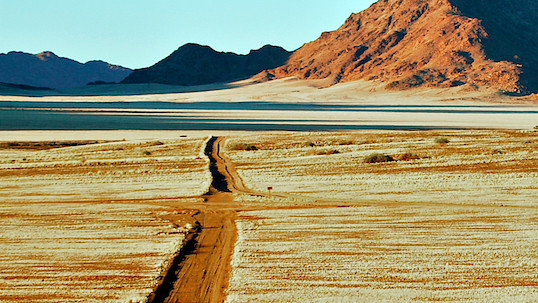 
Wikipedia
"Some books are to be tasted, others to be swallowed and some few to be chewed and digested." Sir Francis Bacon, Of Studies
Top

Thanks FF!
Very interesting terrain. And picturesque.
Thanks for researching all of this. It really helps with visualizing the settings in the book.

Thank you! I think it does also. Strictly speaking Coetzee's intent was for a landscape that would not be easily translatable to any specific location. In fact he stated that the milieu of the novel did not exist. The deliberate intent was to produce a sense of remoteness, placelessness. That said, he did use a lot of the Karoo landscape, but mixed up with other places. I have an upcoming tidbit on the writing of the novel that should make this more clear.

I hope all are enjoying the THREE RELAXING videos at the end of the tidbit. You don't have to read this one to enjoy it!
"Some books are to be tasted, others to be swallowed and some few to be chewed and digested." Sir Francis Bacon, Of Studies
Top

He painted such a clear word picture in the book that I could see clearly in my mind the fantasy world he created. I suppose on some level he must have been influenced by the surroundings he knew.
Top

. I had the same experience when I read the book. There are only a few books that impress one.
Top

He certainly painted a vivid picture with his words and these pics help to solidify it.
Very lovely terrain, but also very difficult for survival if you don't know what you're doing.

And the videos are a nice touch! I couldn't watch them on my phone but watched them later on my computer.

Glad you liked them! I think there is a certain purity to the barren landscape, all stripped away except the essentials. Maybe someday I will get to South Africa.
"Some books are to be tasted, others to be swallowed and some few to be chewed and digested." Sir Francis Bacon, Of Studies
Top
7 posts • Page 1 of 1