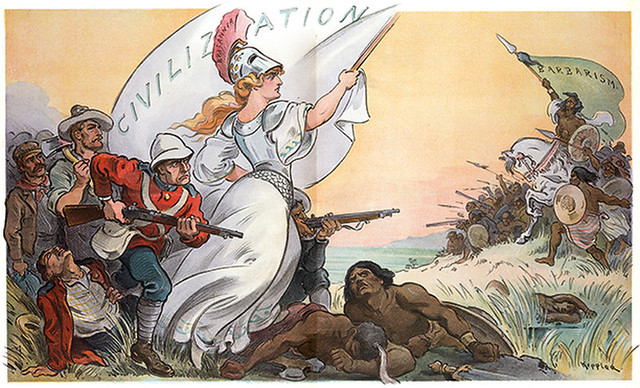 “It is always possible to bind together a considerable number of people in love, as long as there are other people left to receive the manifestation of their aggressiveness.” Sigmund Freud

This tidbit looks at the psychology that turns a pastoral nomad into a barbarian.

Let’s begin with a short discussion about how our mind works and how we react to others. The German philosopher Hegel introduced the concept of the Other as part of his work on self-consciousness, the sense of self as a distinct unit of awareness. One of the reasons we are able to address ourselves as “I” is because of differentiation. I am not him, nor her nor them. I am I, separate from and conscious of my separation. Another German, the philosopher Husserl, contributed the concept of inter-subjectivity, the psychological relationship between humans, stating that our ability to develop and sustain relationships is based in part on our sense of the Other. Differentiation is needed, otherwise the mind might assume it is talking to itself. That spark of something new, something not us, is at the beginning of every human relationship. The French philosopher Sartre further expanded on inter-subjectivity, stating that the appearance of the Other alters our world, to the point that we may feel that the world itself is oriented toward the other. Think of it this way, you are on vacation and you stop at a store. That moment when you enter the shop and walk toward someone, you know you are entering their world which is different from your world.

The next step is to assign value to the Other. If I am walking toward a person behind a counter, I can conclude that this person can provide me with something. But what happens if I am standing on the street with my dog at midnight and a figure walks toward me in the gloom. How do I assign value? Or, another case. I am an explorer and I have just put down my anchor. As I look over the beach I see a group of people clustered at the edge of the sand. They look nothing like me and my humans. Just wholesale different in every way I can imagine. In fact I don’t even have words for what I see. Their bodies, faces, what they appear to have on their bodies, what they are holding -- none of it fits into my world.

The valuing process would continue when I approach them. When I speak, these Others do not acknowledge me in a way that makes sense. It’s the old blah blah. What are they saying, and are they in fact saying anything? How do I value them?
Part of the valuing process, of course, is the human propensity to distinguish and rank things. Big versus small, better versus not as good. Now add power to the mix, “ the capacity or ability to direct or influence the behavior of others or the course of events.” Those with power have the capacity to define the Other, and to choose the criteria that divides one group from another on the basis of their “otherness."

There has always been a human tendency for one group to define another group as ‘other,’ and in the process view ‘the other’ as less than. The term ethnocentrism has often been used to describe this phenomenon. The Chinese Shang Dynasty (1600 - 1000 BCE) considered itself the center of the world, viewing other civilizations as barbaric. Likewise, the ancient Greeks when they encountered other civilizations, used their culture as the reference point, the norm, by which to judge what they found. If a culture was thought to lack Greek givens, it was inferior. 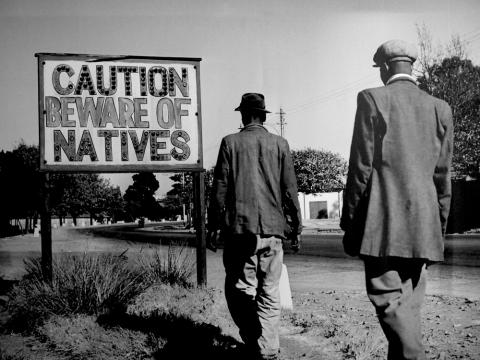 
The four hundred years of European exploration met new cultures with a similar handicap. Using the marker ‘different from’ rather than ‘like us,’ explorers packaged discoveries on the basis of how dissimilar and inferior what they found was from what they were. One might say that colonizing is easier if you determine the culture you’ve met is not up to your standards and thus likely to benefit from anything you offer. At least that is the assumption.

While it’s clear that the exploring and the colonizing societies profited from contact with new societies, how did the members of these societies fare?

There is a sociological term that uses the word ‘other’ as a verb -- as in ‘to other’ or ‘othering’. To other is to define in opposition. Put another way, to other is to construct a dichotomy: ‘of me’ and ‘not of me.’ The Polish sociologist Zygmunt Bauman framed the concept of dichotomy like this: “Woman the other of man, stranger the other of native, enemy the other of friend, “them” the other of “us.”

Simone de Beauvoir wrote about dichotomy in her book The Second Sex (1949) which explored how woman’s perception of herself was intrinsically tied to how she was perceived by man. Historically, that perception has always been in relation to, although I believe we’ve taken significant steps away from that narrow perception. Another writer who contributed to the concept of dichotomy was Edward Said, founder of the academic field of postcolonial studies. Postcolonial studies deals with the cultural legacy of European conquest of territories around the world. His book, Orientalism (1978) examined the dichotomy of West and East, where the West is seen as rational and the East as irrational. The very concept of the East as a construct spun out of minds of colonizers attempting to rationalize their exploitation of other cultures.

The video below was produced by the Norwegian Students and Academics International Assistance Fund:


French psychoanalyst Jacques Lacan examined how language and the perceptions of the powerful play a role in the forming the identity of those defined as outside the dominant culture. Specifically, the fact that the other can be named by those in control -- i.e. assigned characteristics or qualities -- relegates him or her to a subordinate position. As a result, the uniqueness of the individual, or of the group or wider society is lost. Instead of an exchange of ideas we have a one-way transmission of anxieties that helps no one.

If we consider this from the standpoint of postcolonial societies, what is notable is how much time is required to unravel the crippling effects of othering. And beyond those postcolonial societies, othering continues its ability to distort and damage how people on the fringe of the normative society are perceived. Othering occurs both internationally and domestically, on borders but also in schools, affecting whole communities and also the individual. In other words, anyone who finds their identity limited to and proscribed by the fears and misconceptions of others.

The link below takes you to a 2014 Washington Post article entitled “The long and ugly tradition of treating Africa as a dirty, diseased place.” It’s the best example I could find that describes how othering affects both the one naming and the one receiving a name.

Merriam-Webster ‘Words We Are Watching’ Can ‘Other Be Used as a Verb?'

I loved the video...it rings so true. Even as technology has brought the world closer, we still seek ways to separate ourselves from the Other.

We're taught to tolerate/accept the differences but not to speak about or discuss them. At the same time, we are told we need to discuss the differences in order to make a lasting change to current imbalances in our systems (political, religious, cultural, etc.). However, if someone tries to have a meaningful discussion about the differences, the conversation turns to name calling and finger pointing.

It is necessary for a society to live within set rules and guidelines...but whose rules? Whose guidelines? And how should those rules be enforced?

I've just started reading the book, so I have no idea how Coetzee answers these questions but I'm glad we can discuss these issues in the tidbits.

The book absolutely deals with these issues, although obliquely in a twilight world that truly can be seen as anyplace and anytime. It has as many applications for the US or Europe or any culture struggling with how to deal with difference. Frankly, it's a masterful take on the present moment.
"Some books are to be tasted, others to be swallowed and some few to be chewed and digested." Sir Francis Bacon, Of Studies
Top
3 posts • Page 1 of 1