Discuss the latest Johnny Depp news, his career, past and future projects, and other related issues.
8657 posts

justintime wrote:And MY heartfelt thanks to Shook, Ruby Begonia, ForeverYoung, RumLover, and you - Chocolat - for consistently striking just the right tone and vocabulary to rebut AH’s continued efforts to defame Johnny, and for keeping at the forefront how horribly he has suffered these past four years (and continues to suffer).

I can’t help but wonder how many more of these increasingly overt efforts to expand the DV allegations into an arena that includes the “many, many” different types of violence she claims to have experienced and “survived” during a “certain period” of her life. The more desperate she becomes over the next six months, and the less legal pushback she feels, the more emboldened she is and the more hideous are her stories. And they all find their way onto some sort of media platform. If ever a gag order would seem to be appropriate, it is here.


I understand your concerns, justintime, and I share them with you.

Remember, this is all she has left, to continue to bombard the media with abuse talk. Recapitulation of DV is her way to brainwash and charm the naive into still believing her. Amber Heard knows she's loosing ground, now that Johnny cleverly blindsided her with the truth. She thought she was free and clear over the years and had no worries because she had her entourage of supporters and was riding high on a hoax. Johnny needed grieving time and remained quiet and that gave narcissist Amber Heard false confidence. Then, Surprise!....the gathered video evidence that was sinisterly hidden from Johnny, along with a long list of witnesses blew her hoax out of the water. It's been all down hill for the hoaxer now. Tomorrow is her hearing, as you mentioned, and this podcast was her last effort to stress her lies before the media and public in hopes of a favorable court decision. Amber Heard has always used the media to influence public opinion and I suspect she will continue to do so because speculation and poorly acted lies are her substitute for her burden of proof.
~ MAGICK HAPPENS ~
Through the years, for the many xoxo's, giggles & kindness...
thank you & love you Johnny.
Top

I have the impression that Waldman is acting like she did. He seems to drop information bit by bit and she has to react. She has made the same with her pics, videos and interviews. And her spreading of more and more lies she is not only breaking the NDA but it will get more and more hard to remember the lies and get them straight with her so called witnesses.
I do hope the case remains in Virginia.
And certain tabloids seem to have problems. They are deleting and moderating comments. It is not what they want to hear.
Top 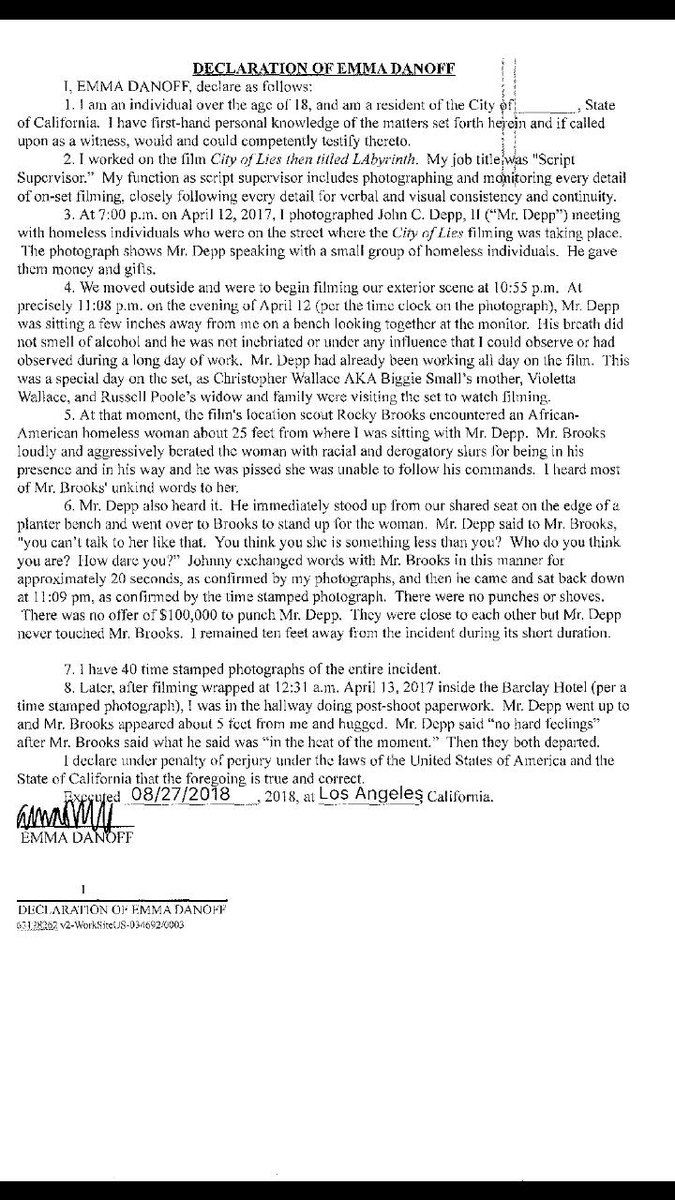 Thanks to Blueeyedgypsy@blueeyedgypsy2
~ MAGICK HAPPENS ~
Through the years, for the many xoxo's, giggles & kindness...
thank you & love you Johnny.
Top

Other witnesses not on previous list
April 2016 (Coachella trip) - (security) Starling Jenkins who had to retrieve Depp's phone after Heard admitted she threw it off the balcony.
May 2016 (alleged phone throwing) - statement by Jerry Judge

I noticed that Heard was particularly violent and lying on December 15 2015. I don't think it is co-incidence that in Australia on 15 December 2015, the court date (for breaking quarantine with dogs and presenting false document) was set for 18 April 2016. Given the time difference, Heard would have learnt of this development late 14 December or early 15 December. I can think of a number of reasons she might have been angry about this; maybe she blamed Depp for the dog smuggling; maybe she was angry that the Australian government was taking her to court; maybe she was angry because it meant she needed to keep up appearances in her marriage so Depp would support her legal case for 4 months.
Top

I really wish people would not get upset about Amber Heard speaking in public. She is lying and every time she speaks she tells more lies. I am sure Mr Waldman (and his team) are closely monitoring everything that Amber Heard is saying. They can bring public interviews up in court and use what she says in an interview to point out differences in her story. If she was smart she would keep her mouth shut until after the trial. But, she has this need for attention, so she can't keep her mouth shut. She is also desperate. She is not a very good actor and once the hoax is exposed, her career will be in the toilet.
Top

This sounds like the Johnny that we know and love. He is not someone who bullied Rocky Brooks, Johnny was sticking up for a homeless person. Rocky was the bully!
Top

Johnny had 23 witnesses on his list from the dv charge and she had seven, including herself and Johnny

The others were:
1. The big mouth photographer friend iO, who never took even one picture
2. Raquel, who she dumped and is now an ex BFF.
3. Josh Drew (Raquel's now ex-husband) who already gave a statement that Amber never texted Raquel the night of the alleged incident in May 2016
4. The make up artist friend Elizabeth Marz
5. Someone with a PH.D., d who "will testify with regard to clinical and forensic psychology relating to characteristics and traits of victims of domestic violence" meaning someone who never treated her.

Johnny's Declaration in May 2019 states he has "over two dozen objective third parties, including police officers, former employees and neighbors of Ms. Heard and 4 Eastern Columbia Building employees." Below is a list of the names of his witnesses from the dv charge. A lot of these people are named in his declaration in May 2019, so I think it is safe to assume these people are probably witnesses now in the deformation charge.

He also said his former attorney was present in Australia when she threw the bottle of vodka at him, but did not name the attorney in the declaration.
“Growing old is unavoidable, but never growing up is possible."
Top

Very helpful.
~ MAGICK HAPPENS ~
Through the years, for the many xoxo's, giggles & kindness...
thank you & love you Johnny.
Top

Really glad to see Johnny is being defended on some of the other charges he's been wrongfully accused of.
Regarding his kindness to homeless people....years ago when he owned the Viper Room he was known to be very generous to the homeless living in that area.
Top

Johnny Depp has emerged victorious in a battle with Amber Heard over what court his $50 million defamation lawsuit should be argued.

According to court documents obtained by The Blast, a Virginia judge ruled on Thursday that the case will remain there and not be transferred to California, as Heard had wanted.

The judge agreed with Depp that because the Washington Post op-ed by Heard that is at the heart of the lawsuit was published in Virginia, the case should remain there.

As The Blast first reported, Johnny Depp sued Heard for defamation over an op-ed Heard wrote last year where she referred to herself as “a public figure representing domestic abuse.”

And Wit, was his vain frivolous pretence
Of pleasing others, at his own expense

That is great news indeed.

Even such a small victory is still a victory.

I just so hope that he wins the defamation lawsuit against this hoaxer woman in the end.

EVOLVE THE FUTURE - Dr. Will Caster, Professor at Berkeley

I think it's a huge victory, actually. She wanted it thrown out of Virginia court and got shut down.

Well what a very good day. This and news about Barbarians.

Not only is it so great that the case stays in Virginia, I couldn't quite have born the reaction of her fans if he'd had to refile in California. They would have misreported it as a defeat and vindication that she was right. Could you just imagine the months of tweets about how a judge had cleared her etc etc.......
Top
8657 posts