Discuss the latest Johnny Depp news, his career, past and future projects, and other related issues.
598 posts

That moment #backstage at @theroxy in #Hollywood when #MarilynManson and #Kesha try to beat each other's score in candy crush on an #iPhone. At least that's what I'm ASSUMING they are doing. Looking forward to capturing more of these #behindthescenes moments as more #HollywoodVampires dates are announced for next year! -------------------------------------------------- #rocknroll #tour #alicecooper #joeperry #johnnydepp #losangeles #blackandwhite #candid #theroxy #nashville #rockstar #popstar

UPS just dropped off some beautiful deep red garnet stones that I will set backwards in the eyes of 3 radical RS.925 tribute skull rings being made for 3 badass Rock n Rollers..Now I am ready to start the night of work behind my bench. G.I.F.D.!

LOS ANGELES, Feb. 4, 2016 /PRNewswire/ -- The Hollywood Vampires (Alice Cooper, Johnny Depp, Joe Perry) will make their television debut in front of a worldwide audience when they perform on the 58th Annual GRAMMY Awards®, Feb 15 on CBS. A super-group comprised of rock royalty and Hollywood superstar, the Vampires will hit the stage offering fans a special surprise for what will be a highlight on Music's Biggest Night®.

The Hollywood Vampires live again with the release of a new digital deluxe version of their self-titled album available to all digital partners on Feb 12. This expanded version includes three additional songs, including one original and two rocking covers. Buy: iTunes  Google Play

Also included is "I'm A Boy," a Who original, that was only available as a Japanese bonus track.

"7 and 7 Is" is an unreleased track from the album sessions and is the classic song by the legendary Los Angeles band Love, a Vampires special pick and one that Alice covered on his 1981 solo album, Special Forces.

A little history on the Vampires: in 1969 on the Sunset Strip at a club called the Rainbow Bar & Grill, the Hollywood Vampires were born in the upstairs bar. It was a gathering place for the rock stars living in or passing through L.A. "To join the club, one simply had to out drink all of the members," says Alice Cooper, a founding member of the original Vampires.

Alice and good friend Johnny Depp got together and decided the spirit of the Hollywood Vampires should live again (minus the drinking). Alice and Johnny were joined by Joe Perry, who is an old friend of both of them, and the recording began: a tribute to the original Hollywood Vampires. An environment was born for great artists to hang, laugh and play together.

Joining the Hollywood Vampires for their GRAMMY® performance is Matt Sorum on drums, Duff McKagan on bass, Tommy Henriksen on guitar, and Bruce Witkin on piano and guitar.

During the recording of the album, Alice, Johnny and Joe and producer Bob Ezrin were joined by an amazing group of modern day Vampires, including Perry Farrell, Dave Grohl, Sir Paul McCartney, Joe Walsh, Slash, Robbie Krieger, Zak Starkey, Brian Johnson and Kip Winger, to record tracks by their dead friends and heroes.

The album package, an antique book, was created by noted men's fashion designer (and rock fan) John Varvatos in his signature vintage style.

All artist proceeds will be donated to MusiCares, an organization that provides a safety net of critical assistance (financial, medical and personal emergencies) for music people in times of need.

The Last Vampire (original track)
Raise The Dead (original track)
My Generation
Whole Lotta Love
I Got A Line On You
Five To One / Break On Through
One / Jump Into The Fire
Come and Get It
Jeepster
Cold Turkey
Manic Depression
Itchycoo Park
School's Out / Another Brick in The Wall
My Dead Drunk Friends (original track)
I'm A Boy (Japanese bonus track)
7 and 7 Is (unreleased track)
Bad As I Am (new original track)
Photo - http://photos.prnewswire.com/prnh/20160203/329600

Supergroup, which also features Johnny Depp, Joe Perry and Duff McKagan, will play Motörhead tribute and new song "As Bad as I Am" at trophy ceremony

Alice Cooper and his Hollywood Vampires bandmates will bring some edge to the Grammys next week with a tribute to late Motörhead frontman Lemmy Kilmister and the premiere of a hard-rocking, brand new song, "As Bad as I Am." "We started this band as a means to toast our 'dead drunk friends' at the Rainbow, all the ghosts in the bar, and now I guess Lemmy is involved in that, too," Cooper tells Rolling Stone. The group – which includes Johnny Depp, Aerosmith's Joe Perry and Guns N' Roses' Duff McKagan, among others – are set to perform both during the awards ceremony, which will air live on CBS on February 15th.

"Lemmy was one of those salt-of-the-earth guys," Cooper says. "Find me somebody who didn't love Lemmy. He's just one of those guys that's impossible not to like.

"He was always funny," he continues. "I'm a 'healed' alcoholic and I haven't had anything to drink in 35 years. A lot of people that drink always feel a little bit like they owe an explanation to me. A couple weeks before his death, Lemmy came up to me and said, 'Alice, I've quit drinking.' And he's got a glass in his hand. And I go, 'Really?' And he says, 'Yeah, I don't drink whiskey anymore. I drink vodka.'" Cooper laughs. "And I went, 'Lemmy, do you think your liver has any idea what color the alcohol is?' He said, well it's a step down from whiskey.' And I went, 'OK. Any step's a good step.'" He laughs.

Although Hollywood Vampires are still planning what they will do at the Grammys, Cooper wants to sing "Ace of Spades." Asked if he'd attempt to approximate Kilmister's gravely snarl on the song, Cooper laughs. "I might do it more 'Alice Cooper style,' but it would still have to have that growl, that guttural voice to make it work. I can't picture, like, Creedence Clearwater doing that song."

The Grammys will also serve as the first time people will hear "As Bad As I Am," which will appear as a bonus track on the upcoming deluxe edition of Hollywood Vampires' 2015 debut. The digital release, which will also stream on Spotify, will also contain two previously unreleased covers – the Who's "I'm a Boy" ("I did that song once with the Who because it was so obvious for Alice Cooper to sing," the singer says, "'I'm a boy, I'm a boy, but my ma won't admit it'") and Love's "7 and 7 Is" ("I still have no idea what the lyrics mean," Cooper says with a laugh, "there might have been drugs involved") – when it comes out on February 12th.

With a scratchy guitar riff and locomotive, Aerosmith-y rhythms, "As Bad as I Am" and its catchy chorus – "Here's to you, as good as you are/ Here's to me as bad as I am" – came from Depp. "Johnny says to me, 'My dad was a bit of a rounder, one of those guys that was in and out of trouble all the time,'" Cooper explains. "'During Thanksgiving or Christmas, when we'd toast, he'd say, 'Good as you are, bad as I am.'" Cooper laughs. "And I went, 'Wow, that's really good.' That actually sounds like an old, Irish toast of some sort. So once again, almost everyone in the band is a recovered alcoholic and it refers back to alcohol."

Beyond the theme, though, Cooper's just happy with the way it sounds, and he's looking for an opportunity to share it. "I like that it's a pure rocker," he says. "It moves. It's what I think rock & roll needs right now."

Thanks, emma!
How exciting to see them perform on the Grammys! 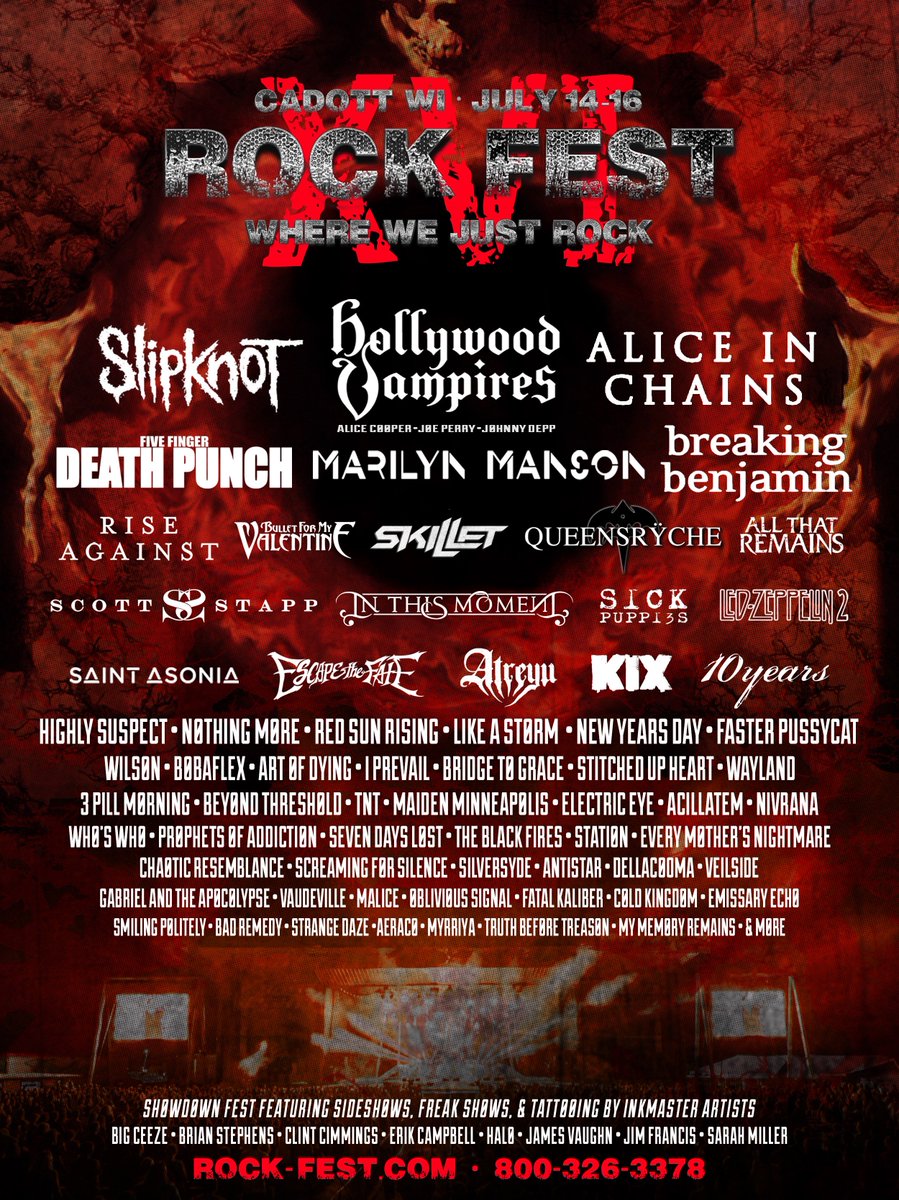 Great news, looking forward to hearing some "new" Vampires songs, especially the other original. Hopefully there will be a decent video from the grammy's. I also hope in light of this new deluxe version of their album that they are still planning to do a second album...
"There is certainly a part of me that tends to be that loner. You never find me in the center of the crowd. I just like to stay back a little and hang in the shadows."
Top

So the Vampires are going to play a US venue at Rock-Fest! I had to read through the site to find out where it will be held...Cadott, Wisconsin. So it's another trip to Wisconsin for Johnny!
Top

Lyric premiere! From the new song "Bad As I Am," off the deluxe album, which comes out this Friday February 12th.

Get your tickets here: http://www.rockinriolisboa.sapo.pt

"The Hollywood Vampires (Alice Cooper, Johnny Depp, JoePerry) kick off the summer with their first U.S. festival headline show and also on the bill, their friend Marilyn Manson among others. The Vampires make their worldwide television debut when they perform their new single “Bad As I Am” from their new deluxe album on the 58th Annual The GRAMMYs Awards®, Feb 15 on CBS. A super-group comprised of rock royalty and a Hollywood superstar, the Vampires will hit the stage offering fans a special surprise that will be a highlight of the show."